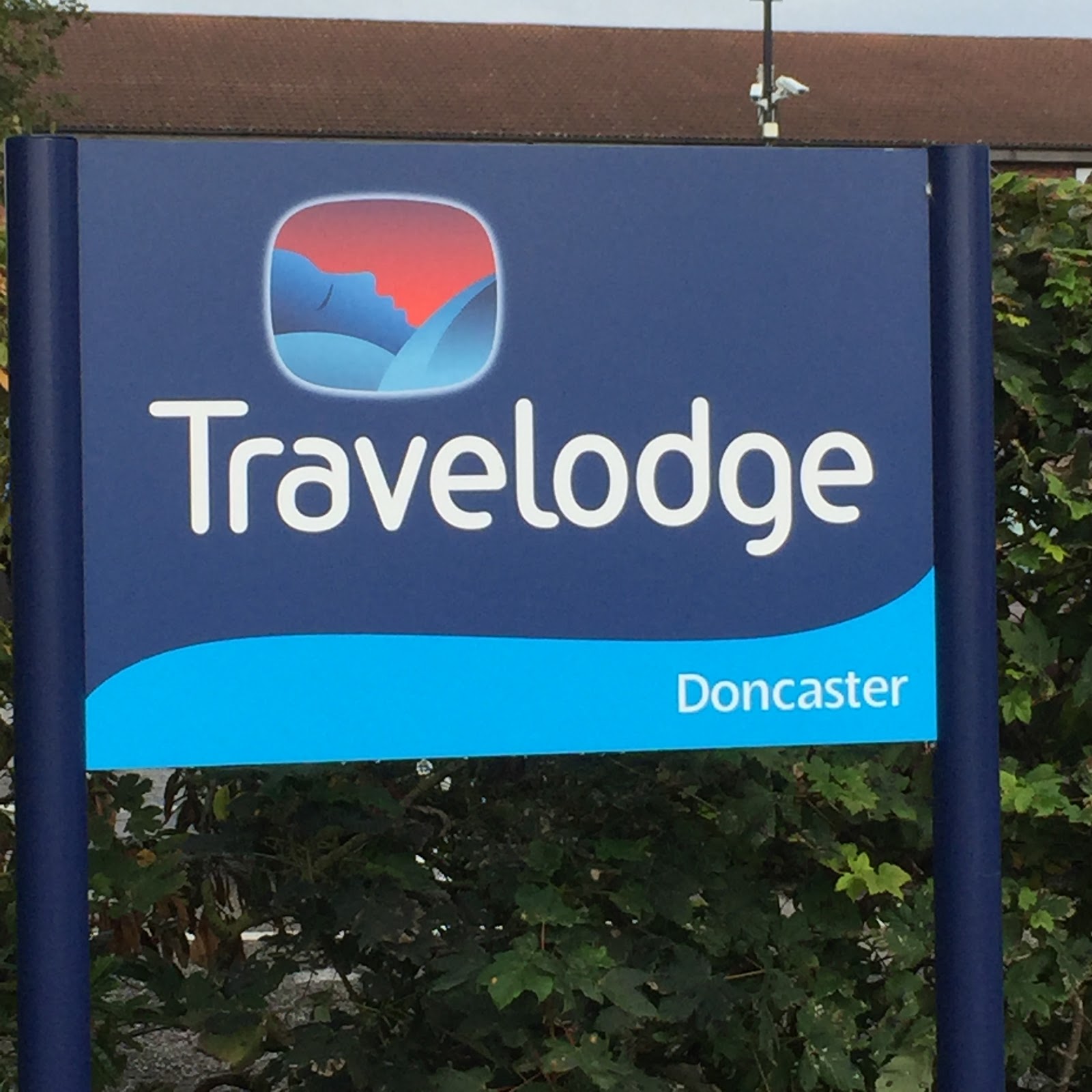 Spending a couple of nights at Doncaster’s Travelodge near Hampole brought me back to my roots in more sense than one. The occasion was visiting friends and family in my native Doncaster and the churches I served in Bentley and Moorends. It was also an opportunity to connect with the faith of the church through the ages through a mile’s walk down from the busy A1(M) to a quiet hamlet. Hampole is writ large in Christian history on account of its mystic Richard Rolle (c1300-1349) commemorated 20 January in the Church of England. The hamlet has a commemorative column but little otherwise resonant of the saint save the stream by the site of his hermitage with tranquillity impacted by the London to Leeds railway crossing it. 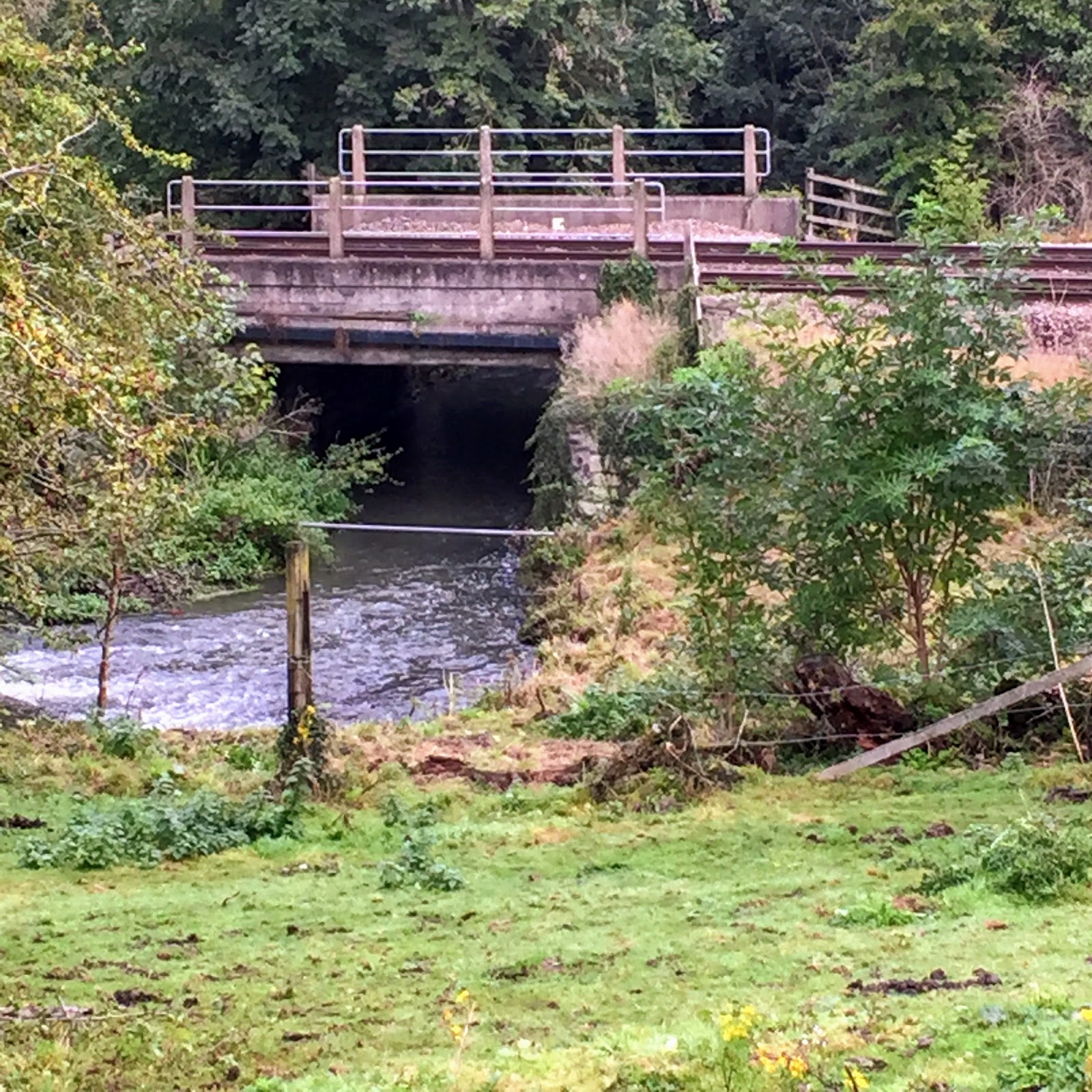 ‘My King that water gret (wept) and blood sweat sithen full sare bet (after being beaten) so that his blood him wet when their scourges met’ Richard Rolle (c1300-1349) wrote possibly looking at this same Hampole stream (picture), now crossed by the London-Leeds railway, evoking the tears of Christ shed over this beautiful yet troubled world. ‘Jesu, my soul thou mend, thy love in to me send that I may with thee lend (abide) in joy withouten end’ (Rolle’s poem: My King that water gret). Though his Middle English vernacular is strange to us the saint’s breaking with Latin to write in the English of his day made his works once more popular than Chaucer’s. People were awed by his speaking the core truth of Christianity in language intelligible to lay people. Such was his passion to make the work of Christ known he translated the scriptures to benefit the common folk becoming it is said the first to write in English. 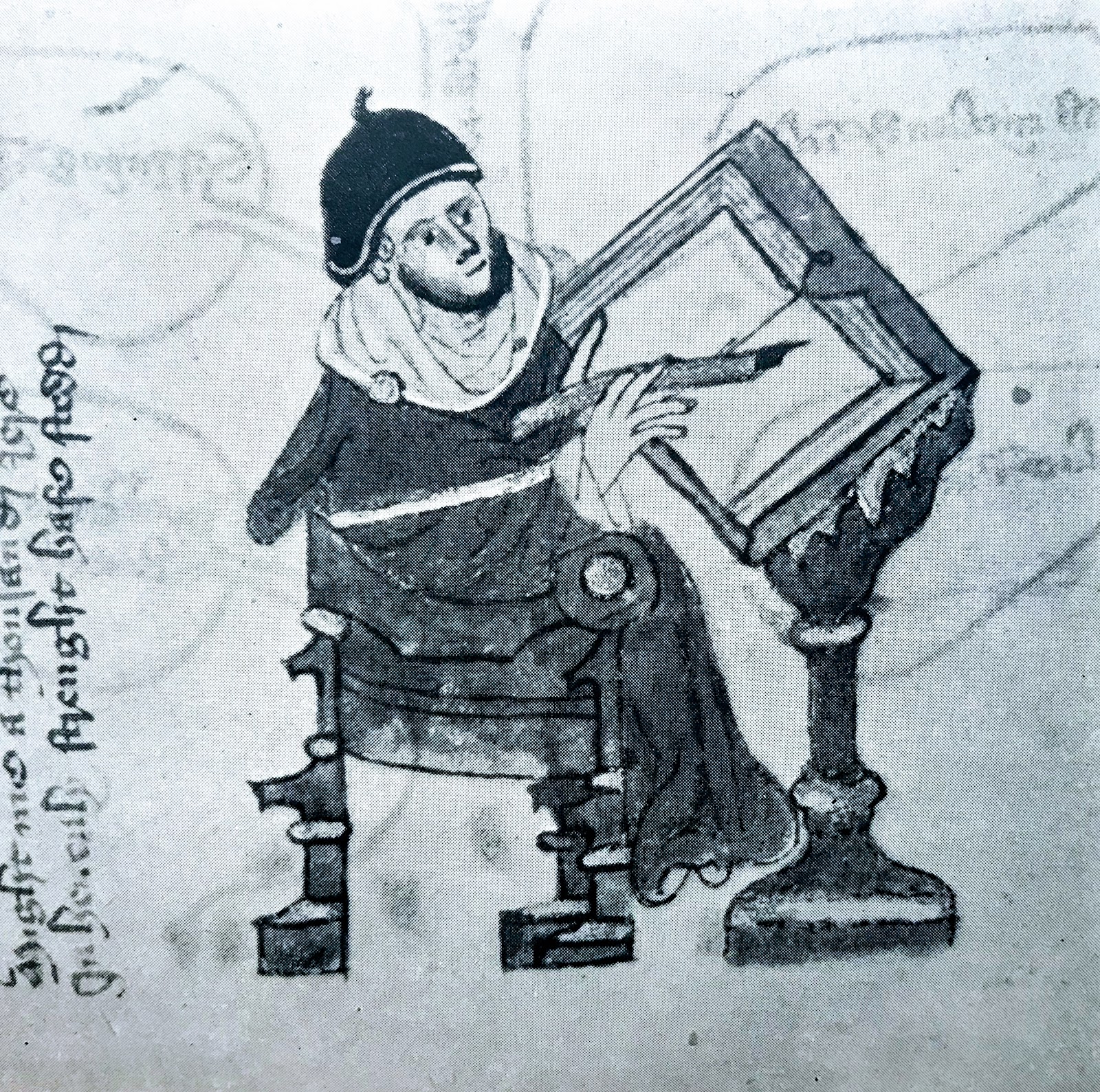 What I find so attractive in Yorkshire-born Richard Rolle (c1300-1349) is how the mystic in him makes servant of his intellect. He went down to Oxford from Yorkshire to return learned yet devout with determination to seek Christ more fully and make Christ more fully loved. It appears he reacted against the dryness of the theology school at Oxford whilst falling there under the influence of the Franciscans. In her ‘Life and Lyrics of Richard Rolle’ Frances Comper notes that while at Oxford, he ‘was imbued with their love for God, and their delight in poverty and simplicity; and was instrumental in spreading the doctrines of St. Francis in the north, since he became the most widely read of all religious writers.’ Rolle makes telling comment in his magnum opus ‘Fire of Love’: ‘An old woman can be more expert in the love of God - and less worldly too - than your theologian with his useless studying’. This book he dedicated to ‘the simple and unlearned, who are seeking rather to love God than to amass knowledge’. 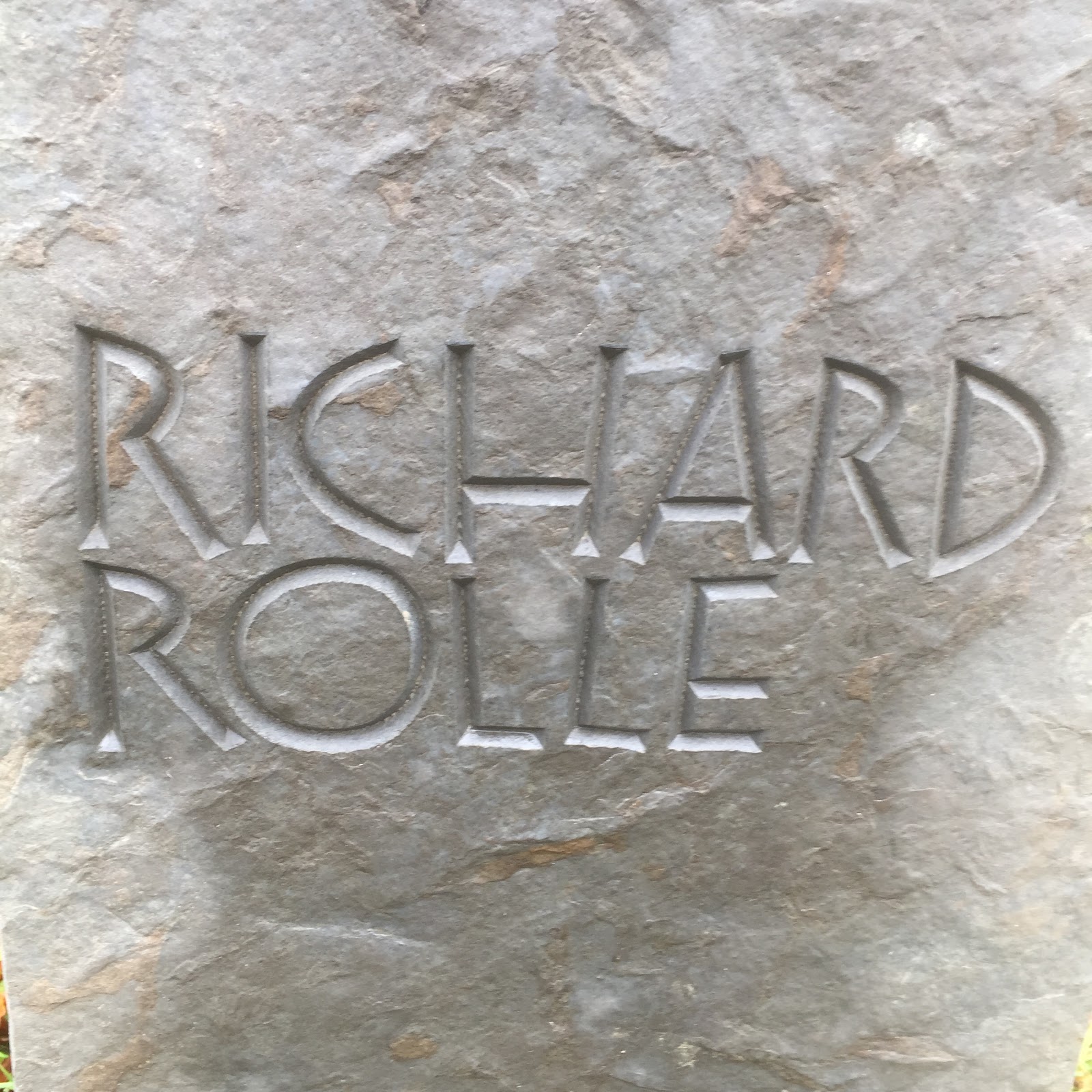 It is fascinating and somehow fitting that Richard Rolle (c1300-1349) wrote so much, and what he wrote was and is devoured by spiritual seekers, yet there is a struggle to gain knowledge about the saint even in his native Yorkshire. This inscription (picture) on a column in Hampole near Doncaster is sole memorial. Part of the reason is the Black Death said to have carried him off in 1349 along with a third of the population, an unimaginable catastrophe which made an impact on church records. That thousands paid court to him and his miracle bestowing Hampole tomb led to the inclusion in the medieval York Breviary of ‘The Office of Saint Richard, hermit, after he shall be canonised by the Church, because in the meantime it is not allowed to sing the canonical hours for him in public, nor to solemnise his feast. Nevertheless, having evidence of the extreme sanctity of his life, we may venerate him and in our private devotions seek his intercessions, and commend ourselves to his prayers’. 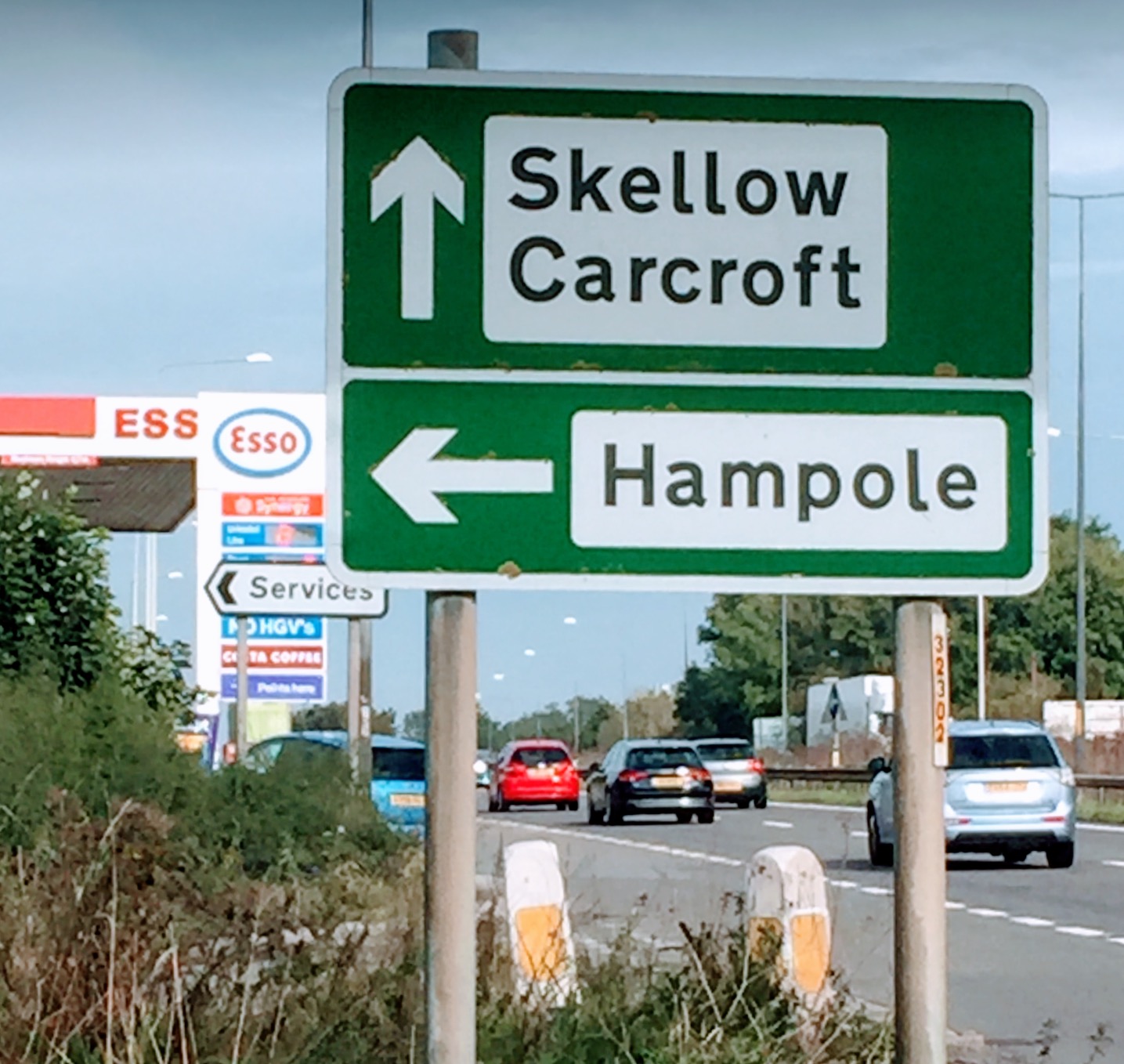 Down a narrow road from the A1(M) is the hamlet of Hampole I visited last year. In the medieval York Breviary there’s an office for Hampole’s saint Richard Rolle (c1300-1349) compiled most likely by the nuns he served. Nine lessons tell the story of his life with another twenty seven telling of miracles that occurred after his death. These texts stand alone, difficult to verify, but have a ring of truth given the astonishing impact of Richard Rolle up to the Reformation when his shrine was destroyed without trace. On my walk around Hampole I noticed buildings with old stones in them, most likely gleaned from the shrine’s despoliation. 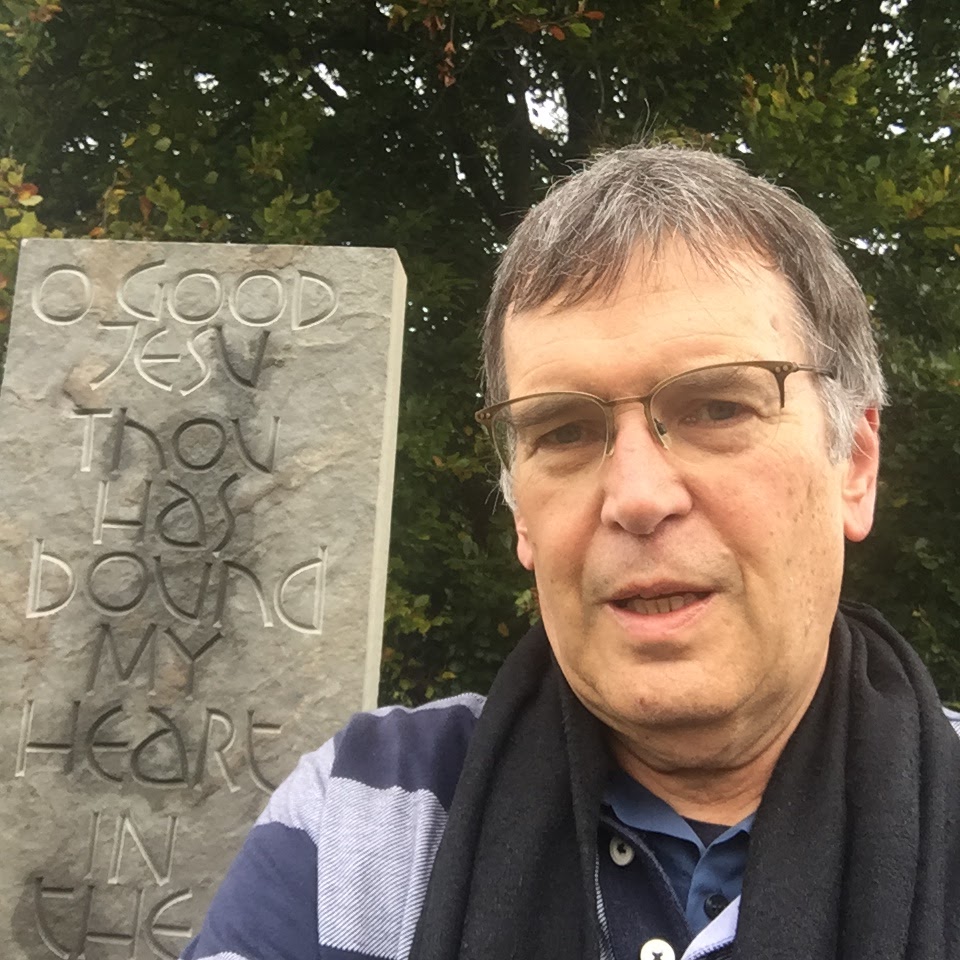 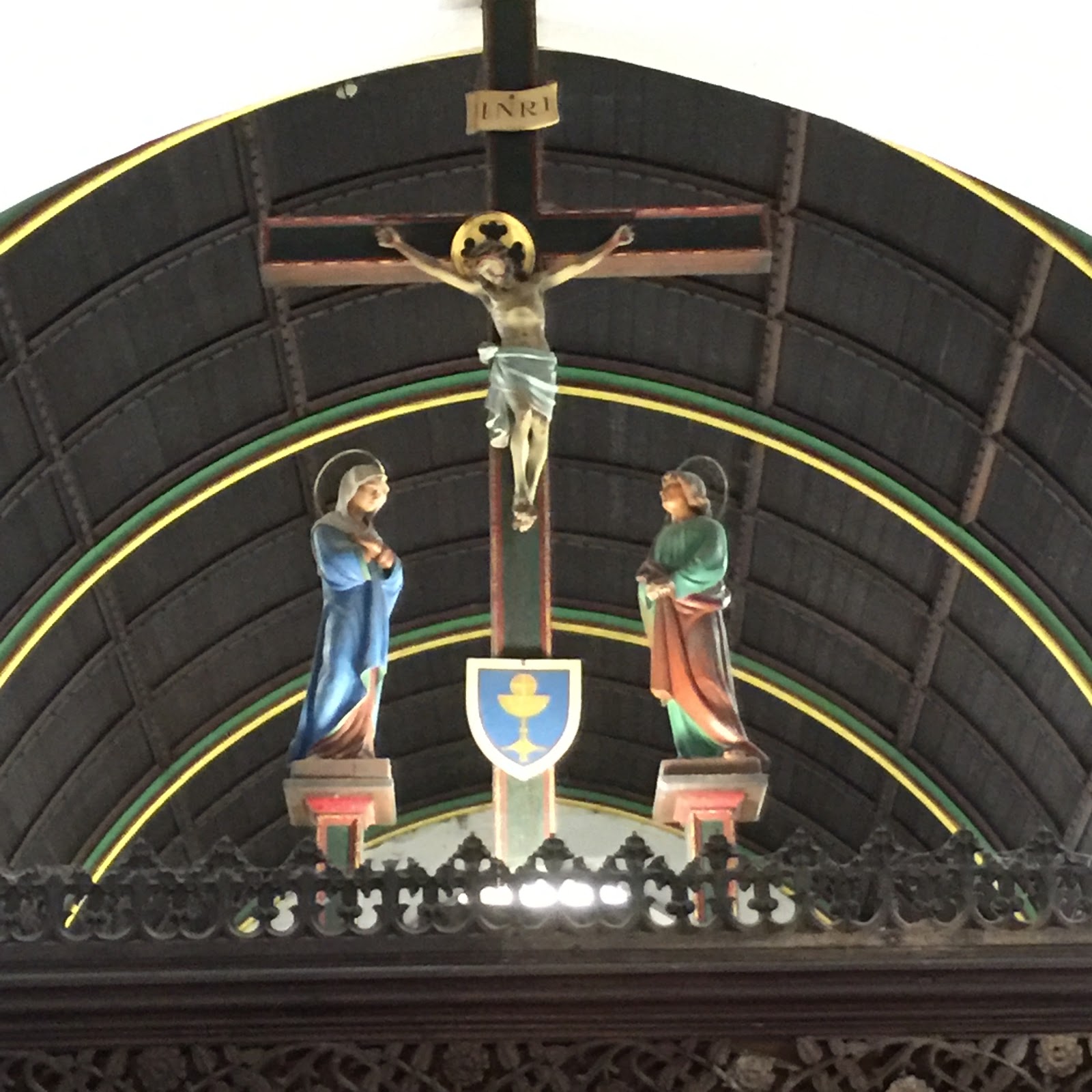 The mystic Richard Rolle of Hampole’s devotion to Jesus is evident in many poems which centre on the crucifixion as graphic evidence of God’s love for each one of us (picture from St Helen, Burghwallis near Hampole). We owe much to him the resurgence of devotion to the name of Jesus in the 14th and 15th century which links in with the age old practice of the Jesus Prayer in the eastern church. Like St Bernard of Clairvaux he is linked with the classic hymn ‘Jesu dulcis memoria’ echoed in Rolle’s ‘The Sweetness of the love of Ihesu’ which begins: ‘Ihesu, thy sweetness who might it see and thereof have to have a clear knowing. All earthly love bitter should be but thine alone without leasing’. 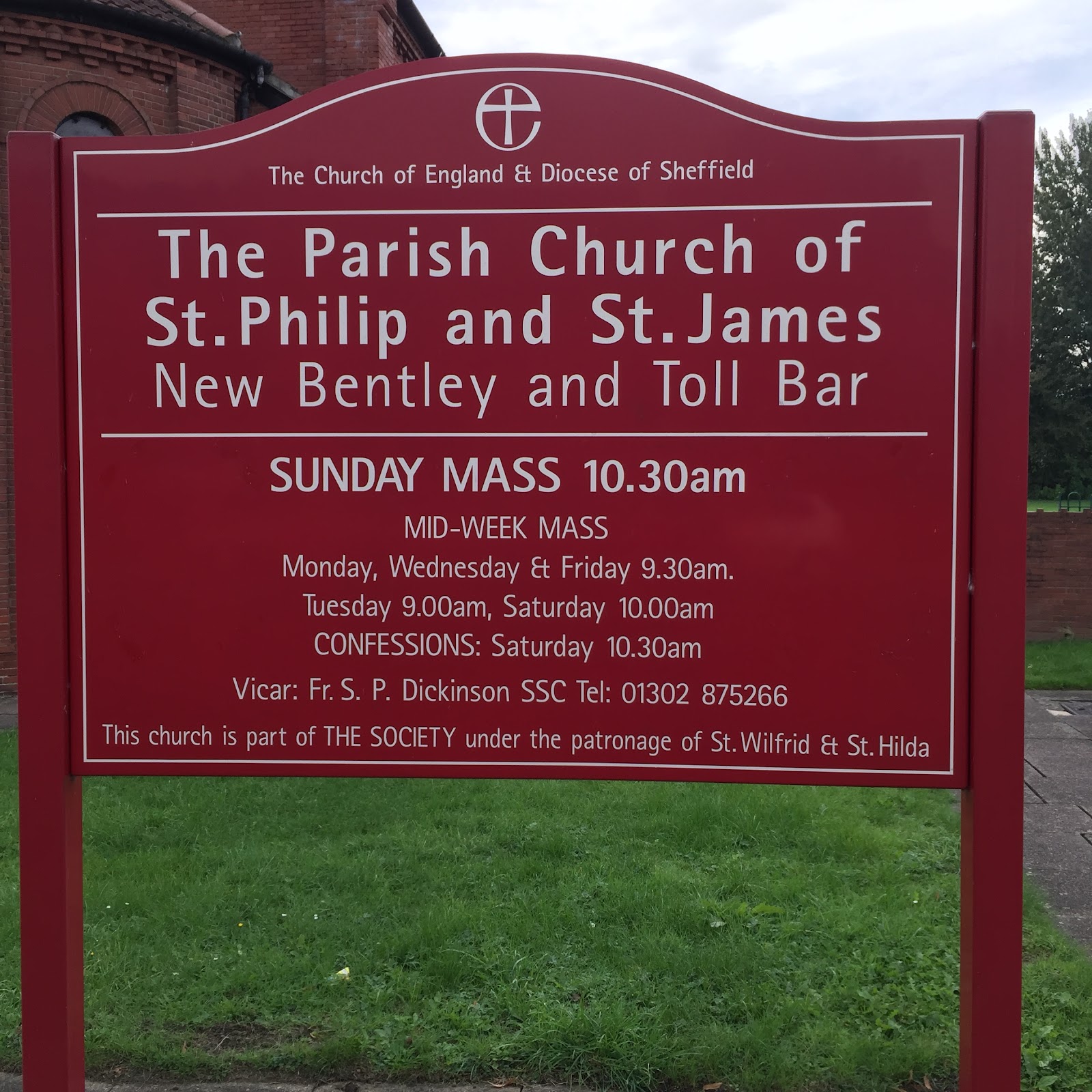 When I served as Curate of SS Philip & James, New Bentley in Doncaster I suffered a faith crisis which led me to pray for a fresh vision of God. The consequence was a sense of filling by the Holy Spirit or charismatic renewal experience. While thankful for the experience I found myself seeking counsel to see how this resonated with the faith of the church through the ages which is when I first discovered Richard Rolle (c1300-1349) who had lived so close to my parish. I recall reading this passage from ‘Fire of Love’ recording his own prayer experience: ‘It is said that the nightingale will sing her melody all night long to please him to whom she is united. How much more ought I to sing, and as sweetly as I can, to my Jesus Christ, my soul’s spouse, through the whole of this present life.. Flute-like, I shall pour out melodious, fervent devotion, raising from the heart songs of praise to God Most High’. 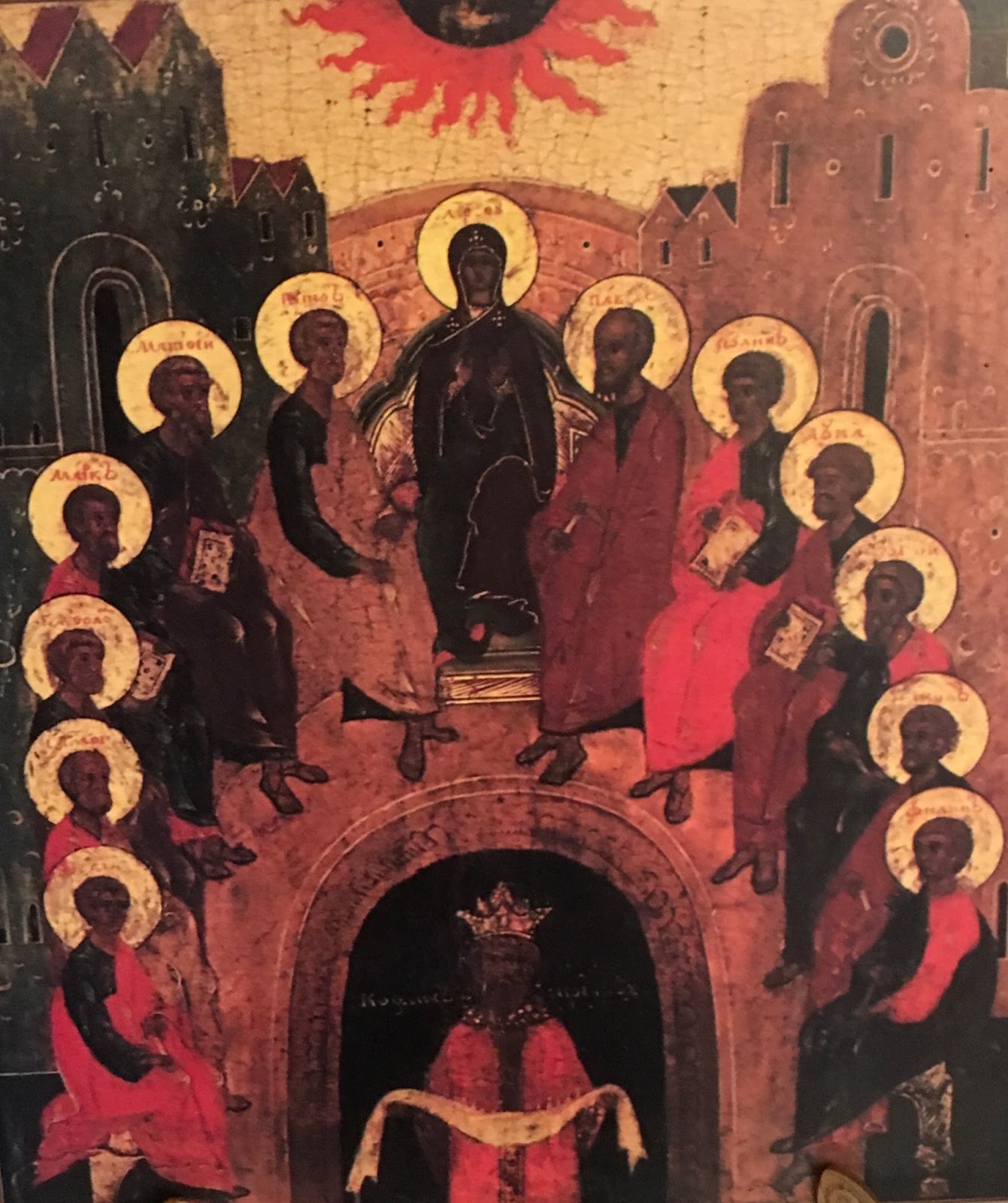 Michael Fleming reflects on Richard Rolle of Hampole’s description of his prayer:  ‘The most marked features in his writings are his evocation of the calor, dulcor, and canor (heat, sweetness, and song) he experienced in the rapture of contemplation, and his most persistent theme, the love of God. The word ‘love’ itself appears almost innumerably in Rolle’s writings, and the message is always the same: man has no higher calling than utter devotion to God, and the reward to the purest and most ardent lovers is the indescribably sweetness of burning in the soul with the melodies of heaven.’ Could it be that Rolle describes in that burning and those melodies the experience of release of the Holy Spirit (picture) common through the Pentecostal movement associated with heart-warming and both speaking and singing in a heavenly language? 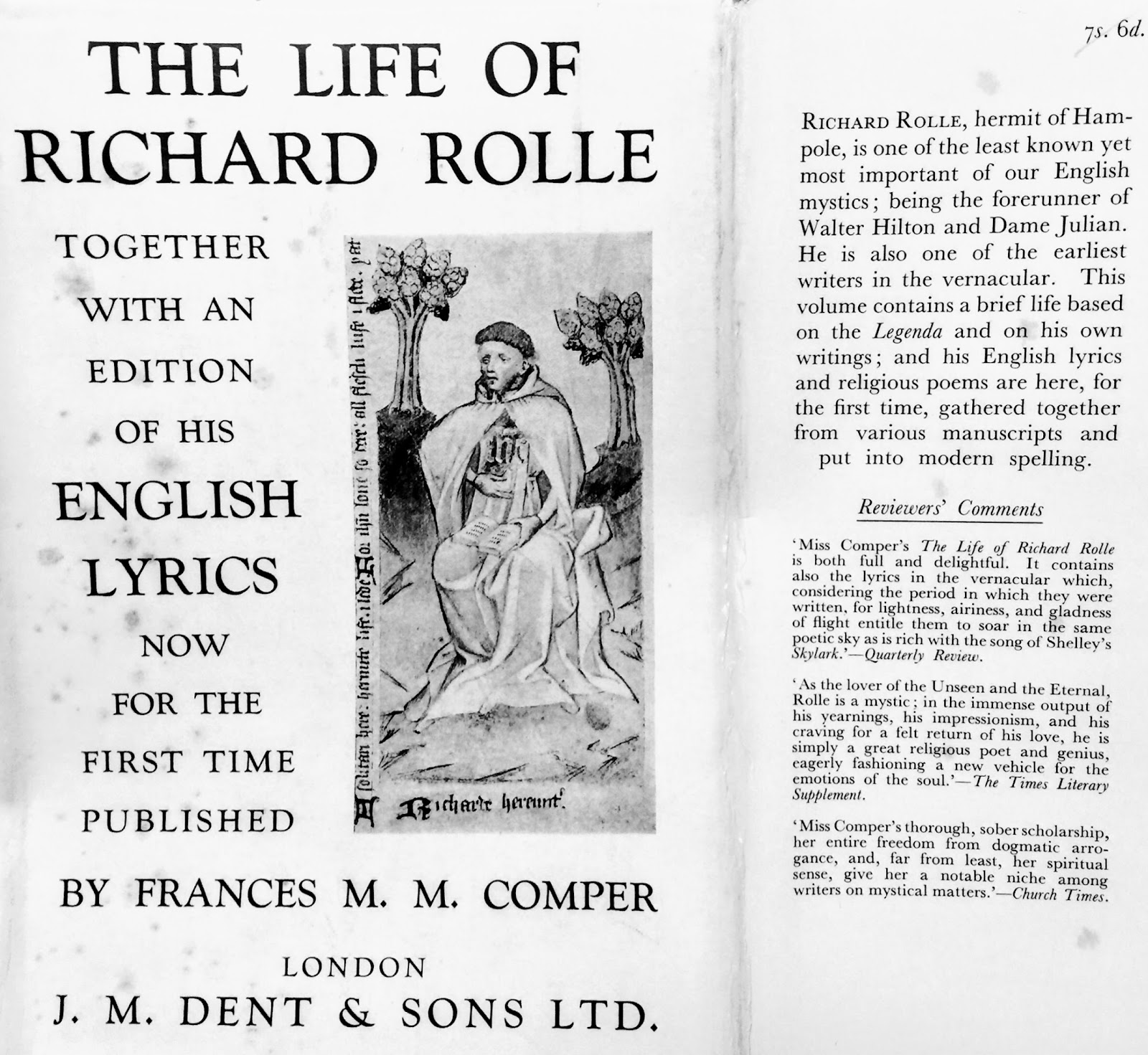 In my day David Lunn, our Bishop of Sheffield, popularised Yorkshire mystic Richard Rolle (c1300-1349) and drew me into his writings. Bishop David’s booklet on the saint picks up on a controversial facet of the saint’s prayer noting ‘he is very much a Yorkshireman… ready to ‘be his own man’ come what may. It is typical that unlike everyone else in those days he believes in sitting for prayer. ‘I have loved to sit for prayer,’ he says, ‘not for fancy that I wished men to speak of me but only because I loved God more than when moving or standing or kneeling. For sitting I am most at rest and my heart is uplifted. But it may be it is not best for another to sit, as I have done and will do until my death, unless he were disposed in his soul, as I am. He’s not changing! … The Nuns of Hampole write how he ‘was sometimes so absorbed in spirit while he prayed, that once, when his cloak with which he was clad was taken from him, he did not feel it; and when, after patching and stitching it, they replaced it on him he did not notice it… He spurned the world too with its riches, being content with only the bare necessities of life that he might more freely enjoy the delights of true love; he had a hard bench for a bed and for a house a small cell; fixing his mind always on heaven.’ 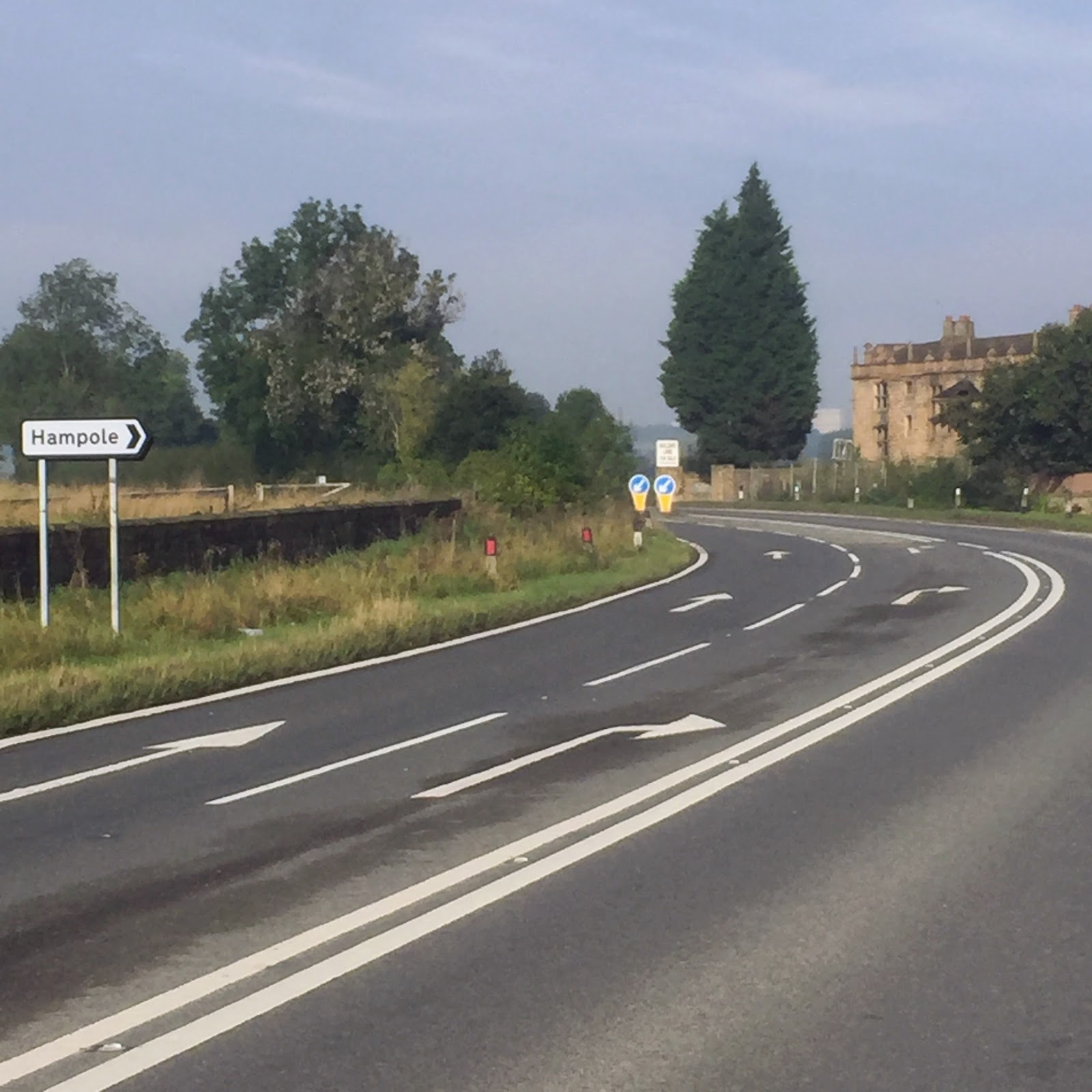 You go off the A1(M) highway to visit Hampole as nowadays you must go into books to discover its saint, Richard Rolle (c1300-1349). In that quest you find a Yorkshireman, straight-talking about Jesus Christ, whose inspiration, teaching and prayer remains with us, part of the faith and worship of the church through the ages. As the Nuns of Hampole wrote: ‘Wonderful and beyond measure useful was the work of this saintly man in holy exhortations whereby he converted many to God, and in his sweet writings, both treatises and little books composed for the edification of his neighbours, which all seemed like sweetest music in the hearts of the devout’.

Canon John Twisleton
I'm a Sussex based priest, ideas and people person, author and broadcaster. My interests include helping people find peace and touch base with mainstream Christian believing. I have published research about the historic Twisleton family and have friends in Guyana, South America where I used to serve as Theological College Principal and am a Canon of the Cathedral.